Eating and Living (The Blue Zones Solution by Dan Buettner) 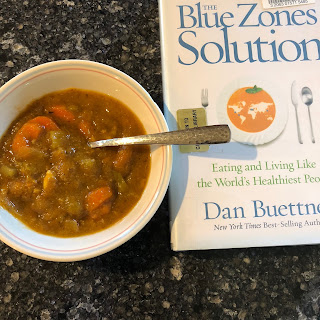 Do I post this with my 52 Books in 52 Weeks Challenge type of posts or with my siblings blog on health? The competitive side of me (not that 52 in 52 is a competition...haha) won out, but I will copy this into our family health blog as well (found here).

Photography is not my strength so apologies ahead of time. This mushroom soup is actually excellent. It did not come from the recipes in The Blue Zones Solution but I have been inspired by Dan Buettner's research into the Blue Zones ever since I first read his articles for National Geographic.

This book goes beyond those National Geographic articles which covered how people in Blue Zones ate and lived. Blue Zones are those areas of the world where the most centenarians live. In The Blue Zones Solution, Buettner revisits those zones in Greece, Japan, Italy, Costa Rica, and, yes, even the United States. In Part Two of the book, his team learned from Finland how to teach three areas of the United States how to create their own Blue Zones. In Part Three, Buettner discusses making a Blue Zone a personal choice, followed by Part Four, the recipes.

Since I've been reading a number of other health books with food protocols in them (Genius Foods, The End of Alzheimer's, and The Plant Paradox), I had comparisons to make. There are some situations that most writing healing food books seem to agree upon: the Standard American Diet is SAD, not just an acronym, but truly 😢, and sugar is not good for us. (See my post on that here.)

However, there are some differences. Legumes. Centenarians eat them, no question about that. And, they do eat bread, just not ones with the kind of grains in the typical SAD meal plan. Legumes and grains are not high on the list of some of these other protocols. That being said, the books previously mentioned are fighting back against some specific diseases (Alzheimer's, inflammations of many types).

I find reading a combination of these healing food protocols and paying attention to one's own body and medical tests are a good start to finding a healing protocol designed for oneself.

The Blue Zones Solution also addresses lifestyles of centenarians, not just healing foods, but a thriving lifestyle, this and the recipes make the book worth buying.

Buettner's Mushroom Stew includes white wine, soy sauce, and rice -- all of which are not healing for my Celiac's, thyroid, sky high iron, or potential for Alzheimer's so I offer my version which I made the day before yesterday and thought tasted quite good! It made just two servings (1 for the day before and 1 for yesterday).

Deborah's AIP  (Autoimmune Protocol) Mushroom Soup
(I use food that has not been sprayed with chemicals, etc.: truly organic in practice, not just on the label)

In a saucepan, cover the following with water:
2 small stalks of celery, sliced thin (I included the leafy parts which I took out before eating)
2 carrots, sliced thin
3 cloves of garlic, chopped or diced
5-6 dried shiitake mushrooms
1/2 onion, diced

I simmered this until the vegetables were soft. The dried mushrooms remained a bit chewy when I was ready to eat so when I...

Blend about 3 ladles and include all of the mushrooms until smooth. NOTE: I learned to hold a towel over the top of the blender when I blend something hot. This is supposed to prevent the top from flying off from the heat. I have not had any flying top disasters.

Put the blended soup into the rest of the soup and simmer to thicken it up. I started grabbing spices, salt, and pepper which I thought were AIP (I didn't double check.) I just dashed them in. Mediterranean salt, pepper, curry, turmeric, and dill weed.

💕💕💕💕💕💕💕💕💕💕💕💕💕💕💕💕💕💕💕💕💕💕💕💕💕💕💕💕💕
Blue Zone ideas for raising children: Besides being mindful about what one eats, having an optimal circadian rhythm for sleep and bedrooms that are cool, quiet, and dark, are beneficial for health. Working in the yard, planting a garden all practices for thriving. Creating a group of mutually committed friends, not just at a stage of life, but people with whom you will be young with and grow old with, is something that people do who live in Blue Zones.

Moving (The Address by Fiona Davis) 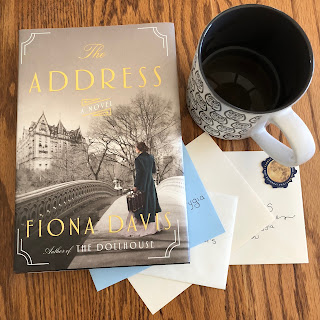 Lovely book cover, sad story that ends well for at least one of the characters (that for my friend who hates sad endings). This is next month's book for discussion at my local library. It's a quick read in spite of the dual time line (1880s/1980s) which in the words of one reviewer "are hard to escape these days." The historical aspect is interesting -- the Dakota New York apartment house where, if it doesn't ring a bell, John Lennon was shot. The other historical aspect and the one that makes this book sad is the portion of the story involving the asylums where women were sent when they were deemed crazy. At a different time, I might have been more energetic about reading this story, but this is the third book in a row where I have been reading about the horrible situations women have been placed in and forced to go through. Nellie Bly's cameo appearance in this story is definitely a highlight. If you get ahold of the book and you have the time, it's worth reading. It's a good choice for a book discussion group, and there were a couple of plot twists: one reasonable, one...eh, maybe. I'm ready to go back to my health and education book reading for awhile, but don't hesitate to recommend a fictional book to me. Just don't make it a sad one for awhile!

I'm going to finish out this section with the last 3 tips on listening gleaned from a 2014 blog piece by Janice Taylor. With the hearts portion of my blog (the mom/grandma portion), I'd say my mom gave her children good advice. Although she applied it to listening to sons, it's more appropriate and less gender specific to apply it to all children, "When a child speaks, stop what you are doing to listen." She applied it to boys feeling that they spoke less. Sometimes that's true and sometimes not. Basically, if I'm with a child (or adult) who rarely speaks up, if he or she starts talking, it would be good to stop and listen! This is a practice I did not excel at.

In the area of good practices, I finish with the last three tips as promised above.

7. Listen rather than judging. This works for a connection with the book. One, several times, characters were not listened to, and two,  some major misjudgments occur.

8. Listen rather than finishing the speaker's sentence.

9. Listen rather than sharing every single story from your own life that might relate closely or loosely to what the speaker is saying.

Maddening (Killers of the Flower Moon: The Osage Murders and the Birth of the FBI by David Grann) 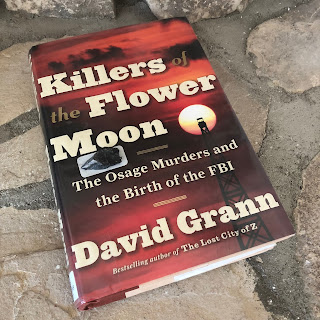 If you know me personally and you're wondering how I came to be reading a non-fiction book like this (it's not my normal "go-to" genre), I was wondering the same thing myself. I came home from vacation, opened up my email, and read that I had this book waiting for me at the library for pick up. I thought: "Did I order this? I know we've been watching Quantico, but I don't think I ordered a book on the FBI!" Then, I realized it was a discussion book for the next library book discussion group meeting.

I know "maddening" is not a gerund which I generally use in my book review blog titles, but the book's story (not the book itself) is infuriating. The story involves one of the worst racial tragedies in the US, and it's not even in American History textbooks. If I were still teaching, I would definitely choose this book as one for my high schoolers to read.

The author David Grann stated in an interview with PBS News Hour that he started writing the book as a "Who did it?" but it became a "Who didn't do it?!" One reviewer mentions that there are a lot of people involved. There are! I feel Grann did a good job of keeping it clear. Pictures helped. Although pictures of the "devil himself" made me even more disgusted with him as he is so smug, so sure that he is going to get away with everything. If it sounds like fiction, it does read like a movie or television series. Apparently the story did make it onto film, but I'll bet that a new movie or tv series comes out of this.

Hopefully, if that happens, those who make it will stick to the story. The greed and travesty is unreal as it is, but the goodness of those who helped and tried to help is equally amazing.

Embedded in all of this is also the early beginnings of the FBI which adds to the story. Ratings wise, I'm saying 4 stars only because I save 5 stars for books I buy full price. IF I were teaching this, I would buy it and it would be bought for all my students. In that respect, it is a 5 star book.  I recommend the book.

My family moved from a very diverse area to a not-so-diverse area. Thankfully, we have much diversity in our friends and family. I have never regretted teaching my children to love people of all ethnicities. I can't really say "teaching" as we just lived out being friends with all manner of people. I could  have done a better job with the homeless.


People should talk to us with the same kind tone that they talk to other children.
(Beeru, ragpicker, 14, member of child workers union, India)

Wow. Lots of great ideas can be found, but how about starting with how we talk with one another? If you're a person of influence in a church, then I have some really great ideas. How about living in the poorer neighborhoods or setting a family up in a home next to church members and getting that family financial guidance, marital guidance, childrearing guidance? I've seen it done.

Posted by Deborah at 2:02 PM No comments:

Deborah
Rather than begin yet another new blog, I'm using English Poeima (English craftsmanship, or at least working on it) to blog about Slow Track Christ-centered Spiritual Formation. That covers a lot of areas that some might not think of as spiritual formation, but I think of spiritual formation as involving my mind, heart, body, soul, and will. It includes other people, too.