Traveling (And We're Off by Dana Schwartz)

52 books in 52 weeks. Actually, I have read a lot more but failed to record / review them as I went along. I'll finish with a rare 2 star book. I suppose I could give it 3 stars; however, I am lacking in 2 star book reviews so I'll go with the 2 stars. 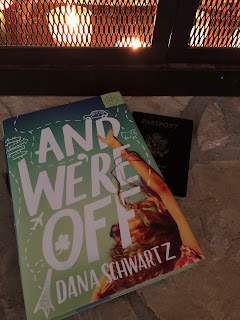 What I will give the author credit for is so accurately portraying her seventeen-year-old protagonist. Schwartz captures the character of that age (of many, not all) so well that it is painful and/or annoying to read. I'm not writing this as just someone past that age. A number of my former students have come back and said they were sorry for being such...teenagers. AND, it's not just the teenager, the mom is equally annoying, and the relationship is equally painful to read.

At this point, my daughter to whom I gifted the book is asking, "Why? Why would you gift me with this book?" Um, I'm hoping she thinks our journey to Italy together (granted, thankfully, she was 25 and not 17) was better than this mom and daughter's journey to Ireland.

I did not read any reviews before getting the book. I needed to pick something and the blurb caught my attention: traveling to Ireland. I still shudder at the realness of the book. I wonder if seventeen year olds would get something out of it...or helicopter moms with issues...or family members before they travel together. My guess is that their focus would be on the dysfunctionality of the other person rather than themselves.
Posted by Deborah at 11:06 AM No comments: 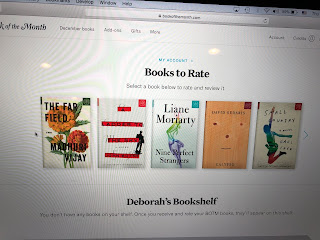 This is not an advertisement for Book of the Month club. It just happens to be the only picture I took that included Liane Moriarty's Nine Perfect Strangers before I gave it away at Christmastime. As a fictional story, I liked the book. In fact, when other reviewers stated this was not as good as her other books, I became excited about reading Big Little Lies which I had just picked up. Now I may have overly high expectations of that novel.

However, since this was my first Moriarty book, perhaps, I enjoyed a taste of her wry observations on modern life. Others felt those same observations were lacking, and maybe once I read Big Little Lies, I too will think Nine Perfect Strangers isn't so perfect. Parts of it are corny and silly, yet, at the time, I was looking for something light to read. This fit. I didn't think about the treatment of minor characters or anything that might have come up in a literature class.

As for Book of the Month? Well, you need to know that if you get a gift subscription for someone and you get a free book for doing so, with the caveat that you are also buying what you think is only one book, you are also signing up for a month-to-month subscription. I did not realize that until I saw 3 monthly charges on my charge card. Thankfully, it all gets credited to your account (you don't lose your money with no books) so I had a few months credit to use. The books all have current publication dates, no oldies but goodies here.
Posted by Deborah at 10:48 AM No comments:

Move over, Brené Brown, Amy Morin's in town! Before you turn away because you think "mentally strong" has something to do with intelligence or IQ, let me assure you that it does not.

"Developing mental strength is about improving your ability to regulate your emotions, manage your thoughts, and behave in a positive manner, despite your circumstances" (Morin 9). 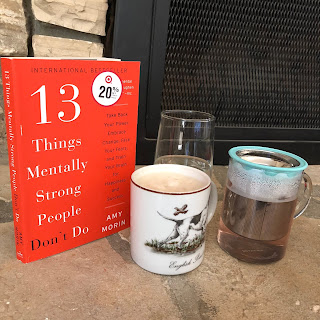 Don't get me wrong. I appreciate Brown's work, but Morin offers even more...this is how I started off writing this blog review back in October.

Then, I read some Goodreads reviews which made me question my high rating. So I shelved my review to think about it some more. In the meantime, I lost the book among my piles of books. At least that fits my method of organization. I don't think I gave it away because I liked it and wanted to refer back to it. Mostly I recall thinking as I read the reviews that it seemed unfair of people to dislike the book just because Morin read her book and she has a high pitched voice. Unfair, but I suppose authors need to take note to get someone else to read their books if their voices are going to stand in the way of the message. Sigh. Others felt Morin was not understanding of deep hurts. I did not get that feeling from the book. I felt strengthened by her research that stated strong people don't let hurtful people turn them into victims.

Since I can't find the book, I can't include other favorite quotes, but I liked the book well enough that I bought her 13 Things Mentally Strong Parents Don't Do. I have not finished it, but, so far, I like it just as much as I liked the first one which was a lot.
Posted by Deborah at 10:12 AM No comments:

Adopting (Before We Were Yours by Lisa Wingate)

Not actually my forty-ninth book in the 52 books in 52 Weeks reading challenge since I have read 52 and beyond; however, I'm slow in posting reviews and this one needs to go back to the library. It was a chosen-for-me book by the library discussion group I attend, and I liked it. I started it the day it was passed out to us and finished it the very next day. 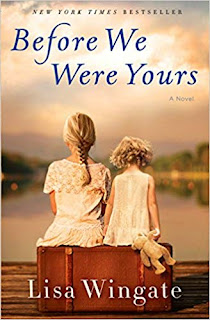 My ratings of 3 and 4 stars are starting to slide together. I can't say that this is a beach read or an entertaining read since the subject is so horrific and horrifically true at that: a woman who steals children (even responsible for the deaths of children) and adopts out the "cute" ones, and then...but, maybe that last part would be considered a spoiler so I won't write it in. It's an historical story set side by side with a fictional story that some reviewers had issues with. With such horrible facts, a little fictional romance breaks the darkness.

I did not actually know this 1930s and 40s account (before my time), but I did remember reading about Joan Crawford's adoption of her children (Mommie Dearest exposed the tragic consequences of Crawford's lack of love for those children), and I wondered if Crawford adopted from this place. It turns out she did along with other well known movie stars and political figures. For those who want all the horror and none of the light fiction, journalist Barbara Bisantz Raymond wrote a non-fiction book.

As an easily read historical novel that made me aware of a heartbreaking story, the book was good, four stars good. Generally, a four star book for me is one that I might buy; it might have quotes I want to remember, and this one does not. So in that line of thinking, I understand someone who would give it three stars.

---My real life section of the blog---One of my siblings is adopted (and usually everyone thinks it is the blonde-haired one since the other six of us (yes, six) are brunettes (or at least we used to be); however, the one with blonde hair has our mother's genes for hair. This sib found the birth mom and was not stolen from her. Good relationships abounded, but that's because of who are mother is. She has the gift of being friends with birth mothers and the wives of her ex-husband and the ex-wife of our stepdad. As long as you don't harm her family, biological, adopted (formally or informally), she will make you feel at home in her presence. I don't know what we would have done if we had found out the adopted sibling was stolen. As far as we are concerned that sibling is stuck with us forever!

💕💕💕 My spiritual formation section of the blog 💕💕💕Just putting this out there, I think the word "adoption" is possibly a human word in scriptures, yet, a human word where God loves us as much as--no, make that "more than", we love our adopted sibling. In God's language, I am thinking that everyone is God's biological kid and God loves us as much as -- no, make that "more than" -- my mom loves each and everyone of her family members. This is God that I want to find and know. 💕

Posted by Deborah at 9:24 AM No comments:

Deborah
Rather than begin yet another new blog, I'm using English Poeima (English craftsmanship, or at least working on it) to blog about Slow Track Christ-centered Spiritual Formation. That covers a lot of areas that some might not think of as spiritual formation, but I think of spiritual formation as involving my mind, heart, body, soul, and will. It includes other people, too.